One Equity Partners sells Smartrac RFID business - What does this mean for libraries? And Bibliotheca?

The other worrying thing for me is that HF RFID technology isn't exploding the way UHF technology is.  HF technology is used in payment cards, ticketing systems, and libraries. NFC (used on your smartphone) is a form of HF RFID.  But it is UHF that is growing by leaps and bounds.  UHF RFID is used with IoT products (Internet of Things) including clothing and shoes (https://www.nanalyze.com/2019/02/smart-shoes-digitally-connected/). And, of course, UHF is the technology used in the supply chain.  You can assume that whatever cool new "smart" thing you hear about is based on UHF RFID.

So, the question is whether Avery-Dennison will keep supporting the less sexy HF library market. Even for Smartrac (who had a relationship withBibliotheca), the library market wasn't their focus.  Instead, library applications fall under the Media and Document Management" market. 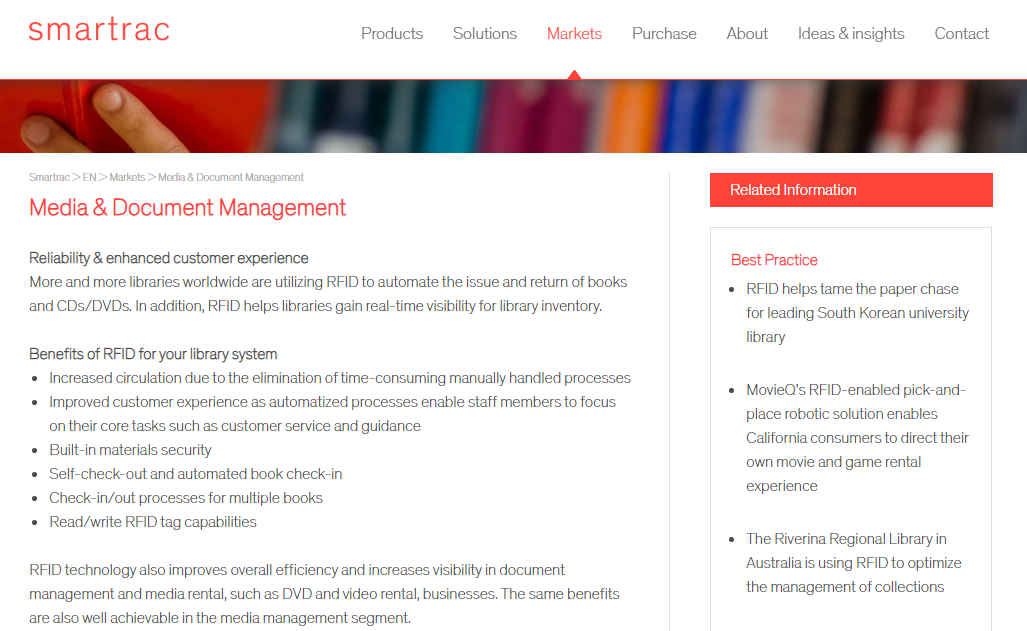 Of course, back in the 3M days, the library products actually lived under their Traffic division so I guess that doesn't necessarily mean anything. Then again.....3M also abandoned us.

So,what to make of this?  I'm not sure yet but I do think we need to think long and hard about whether we want to stick to HF technology. At this point, all of the library products are based on it. In other words, you can't buy a self-check machine or circulation workstation for UHF (at least not in the US).  This is partly because it made more sense in the early days so all the products are based on HF. UHF was less manageable and the HF signal could be better controlled.  HF also handles water better which is one way of saying that a human being doesn't block the signal (humans being mostly water).

But UHF has come a long way and it is LOTS cheaper than HF and has some benefits that might make it more appealing now (longer read range and more tags can be read at one time).  UHF RFID has been used in some Asian libraries for years. In fact, it had already started to peek out as a contender by 2012 when the Library RFID standard came out (NISO RP-6-2012) so there is a section at the end of that document addressing UHF (Appendix C).  One library in the US uses UHF RFID, Grand Rapids Public Library, but it is a proprietary system which doesn't conform to any standards so it wouldn't support interoperability with other libraries (though they like it for other reasons).

For most libraries to switch to UHF, they'd have to find a vendor to sell them UHF based products.  Currently, none of the US library vendors sell UHF based products for self-check, security, circulation or materials handling. So, we are really stuck with HF unless the vendors decide to add that option. But it isn't enough to just add a UHF option - as in HF Self Check and Security Gates or UHF Self Check and Security Gates.  Because then a library on UHF would be incompatible with a library on HF.  Even if the data model was compatible (which it would be if you followed the advice in Appendix C of NISO RP-6-2012), you couldn't read the UHF tag with an HF reader.

Here's what needs to happen.....the vendors need to start configuring their products with dual-band antennas so that libraries have the ability to read their current HF tags as well as any UHF tags they might encounter going forward. Then, whether they migrate to UHF because it is cheaper or if one of their resource sharing partners is using UHF, they could still read the tags.

Researchers are already working on developing dual-band readers for UHF and HF so it is a real possibility to get ourselves out of our current "stuck" position (https://www.researchgate.net/publication/320897633_A_single-feeding_port_HF-UHF_dual-band_RFID_tag_antenna).

So, in the meantime, I'll be adding some new requirements to my self-check and RFID RFPs....can your equipment work with both HF and UHF RFID tags?