I recently participated in a discussion about how to deal with patrons who are nervous about the health effects of RFID.  We all know RFID is harmless, right? My answer is that if you are concerned about EMF (electomagnetic radiation exposure), then library RFID tags should be the least of your worries. Notice that I'm not saying RFID is harmless...

The fact is that RFID tags are a form of EMF radiation and it is just one of many technologies that are contributing to a level of EMF exposure previously unknown to humankind. Animal-kind for that matter.  And while there is no scientific evidence that most of these technologies harm us, it is also clear that the cumulative effect is having an impact...scientists just don't know what it is and what the safe levels are.

In California, there are many people insisting that the local power company pull out the SmartMeters (see http://stopsmartmeters.org/) because they are affecting people in palpable ways: headaches, sleeping problems, fatigue, tingling sensation. Some of the people being affected by SmartMeters are ending up with a kind of sensitivity to EMF not unlike chemical sensitivity. In other words, once they get senstizied to the stronger EMF radiation, the lower levels start bothering them too. And even though the RFID-enabled library security gates aren't going to bother 99.9% of the people who walk through them, people with this kind of sensitivity might have a reaction.

So, while we can point to various reputable sites that will all say there are no known health affects related to library RFID tags (or even RFID tags more generally), it might be more helpful to explain to patrons that library RFID tags are much less worrisome than the numerous other EMF emitting technologies that are part of their lives.

Here's a list of things that I found in my own home that generate much higher EMF radiation than an RFID-based self-check machine:

After conceding the point that we are being bombarded in ways humans have never before been bombarded and scientists really don't know how it all affects our bodies at this point...you can then assure them that what you DO know is that the exposure caused by library RFID use is very minimal. The strength of the signal is much less than any of the things I mentioned above), of very limited duration (just the time required to check in and checkout items) and that there is NO EMF concern from the passive tag in the book because there is no EMF radiation except when the tag is in the presence of the reader (during check-in, check-out, security). 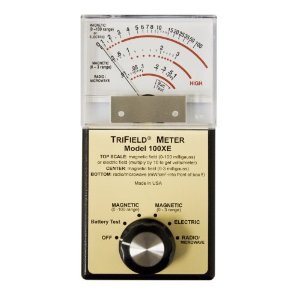 For anyone really concerned about EMF, I recommend purchasing your own gaussmeter (I like the Trifield 100XE-EMF Meter available from Amazon.com for $120 and I also recommend purchasing the book "Electromagnetic Fields: A Consumers' Guide to the Issues and How to Protect Ourselves" by B. Blake Levitt.

After doing several readings around my own home and in my office, I ended up shielding our Wi-Fi so it didn't bombard my partner with EMF radiation but we could still use it. I also got rid of my cordless phone because it was bombarding me! I now use a corded phone (and a lot more speakerphone) instead of the RCA DECT phone was hitting the EMF meter out of the park.

It might not be a bad idea to do some tests at the libraries so you could demonstrate with your library gaussmeter what is really going on with the EMF signals.