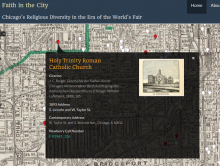 "Faith in the City: Chicago's Religious Diversity in the Era of the World's Fair" is a digital humanities project focused on religious movements and figures in Chicago in the late 19th and early 20th centuries.  The project, sponsored by the National Endowment for the Humanities and The Newberry Library, displays hundreds of historical points as well as essays from over a dozen prominent scholars related to the theme.  The map technology allows visitors to toggle between a custom-generated modern map layer of Chicago and a georeferenced panoramic map from the 1890s, seeing how neighborhoods and the city itself have changed in the past 120 years.

This is one of several projects undertaken with The Newberry.

Faith in the City